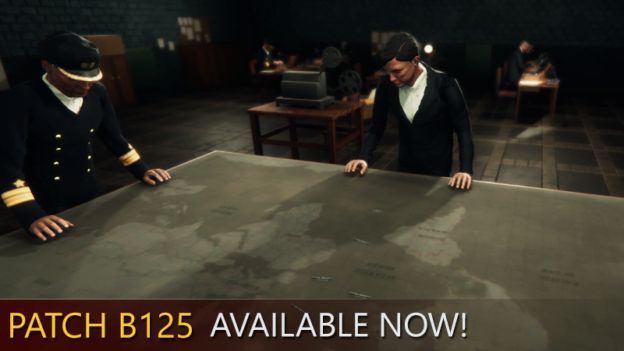 We are back with the next major update to UBOAT. This one is probably the largest update to the game so far. If you haven’t tried it by now on the testing branch, then hopefully it will surprise you in a good way!

We already described the first features of this update when it hit the testing branch for insiders:

UBOAT AnnouncementWed, November 20, 2019Version B125 hits testing branchHello! We are back with a major update to UBOAT. It just hit the “unstable” branch for testing. You can switch to this branch by going to “beta” tab in the properties of the game…
During the testing it became even bigger though, so let’s discuss the new features one by one.

BRIEFING
Assignments are now selected in a new way that gives you a much cleaner overview of the objectives and area of operation.

MISSION CONTENT
You can expect new challenges like a battleship presence in the area of operation as well as some twist to existing missions. Sometimes a war correspondent will join your crew, while in other times you may be given a task to test experimental torpedoes.

Some of the objectives and rewards for existing assignments were also reworked.

DECORATIONS
All your officers will collect points toward decorations of various types. They are awarded for notable bravery in combat or veterancy.

MISSION SUMMARY
New mission summary presents a much more cleaner overview of completed objectives, collected rewards as well as a log from the patrol.

If you would like to start modding for yourself, check our guide on the game’s wiki:

OTHER CHANGES
Aside from that, there was a few other notable additions:

TROUBLESHOOTING
This update adds a considerable amount of new content and thus memory usage had to go up a bit. We implemented new optimizations to the game to offset that, but it’s still going to be 10% – 15% higher than before. It probably won’t affect most systems.

If your system is low on memory though or you use a software that consumes a large part of RAM you can increase the page file in Windows like described in this article to avoid problems (12 GB should be more than enough):

Also, if you would experience any sort of crashes, please verify game files integrity in Steam by entering game properties, going to “Local Files” tab and clicking appropriate button there.