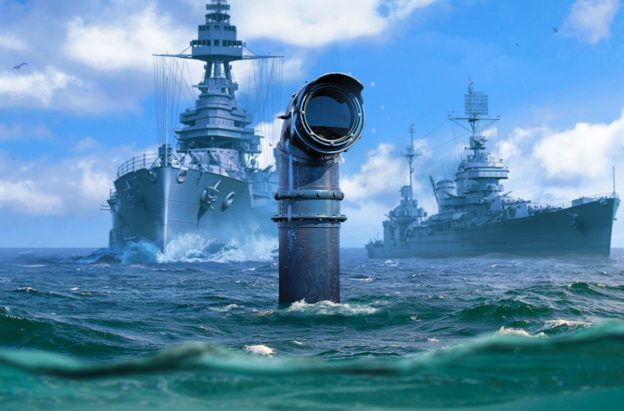 Submarines Coming to World of Warships

We are happy to finally give you an answer to the most popular question in the history of the game: yes, they are coming.

Submarines played an important role in the naval operations of the first half of the 20th century. Their missions and aims were very different from other types of ships in these conflicts. Thus, the harmonious integration of this new ship type into our battle modes isn’t going to be an easy task.

Having tested many prototypes during internal tests, we’re pleased to inform you that our team has been fully engaged in the development and preparation for the launch of submarines into PvP gameplay. To do this, we’ve got several issues to resolve: we have to find the niche that they should occupy, make the gameplay exciting and diverse, work out different options for the interaction of submarines with other ship types and between each other, update our maps, and take many other details into consideration. However, you can already be sure that the underwater hunters will eventually become available in World of Warships.

The first step will come in the form of Closed Tests of the game process in order to evaluate the current concept and ensure the stability of test clients.

Then, Open Testing will take place. During this stage, you’ll be able to share your opinions with us and be among the first players to try out the new ship type in World of Warships. We’re planning several testing iterations during the second stage. It will be something like a Beta Test for the new type. Initially, only some of the players who submit their applications will be able to participate in the testing. Access will gradually be expanded and in time, everyone will be able to take part in the submarine trials.

After this comes the third stage. We’ll add submarines into the live client as a separate battle type, similar to Arms Race, Savage Battle, or Space Battle. The third stage will last several months. This will enable us to make the final touches and adjust the balance of the new type on the live server. When we’re done with all these steps, we’ll be able to decide on the final fate of submarines.

The submarine tree will be built the same way as the aircraft carrier tree: with submarines at even tiers only. The first researchable submarine will appear at Tier VI. This is in part because spreading ships between tiers allows us to balance them more easily within their respective match-making brackets, and in part to have a better differentiation between the initially implemented designs.

Germany, the Soviet Union, and the United States will be the first nations to enter testing. Japan will be next in line for introduction into the game.

Submarines are stealthy hunters, somewhat similar to destroyers. But what will the features of this new type be?

Submarines will have the best stealth parameters, low survivability, and unique controls with unusual new mechanics. Besides the regular horizontal movement, players will also be able to control the depth of their dive.

Changing the depth of a dive allows submarines to hide from enemies and become invulnerable to most sources of damage. However, submarines have a limited supply of oxygen in battle. Once they’ve depleted this supply, they must resurface to replenish it.

There will be three levels of depth:

When underwater, a submarine becomes “blind” and sees other ships only with the help of her Hydrophone, which determines the direction to the nearest ships. The hydrophone displays three ranges: long, medium, and short. Indicators will light up on this interface to allow you to understand how far away the enemy ship is.

Together with the Hydrophone, we’ve added a visual effect that displays sonar waves emitted by the ship, outlining and highlighting the underwater terrain around the submarine. This is not only beautiful and fascinating, but also enables players to better navigate underwater. In consideration of the abilities of the new ship type, you can expect the game maps to be updated.

The main armament carried by submarines is torpedoes with hydroacoustic guidance. While at periscope depth, a submarine can emit a sonar ping after firing a torpedo. You’ll see a special new indicator next to your torpedo icon when sonar is active. The emission mechanics work in the same way as with a usual torpedo launch—lead your target and click the left mouse button. If the ping hits a designated point on the bow or stern of the target ship, the torpedo will be guided to the target. However, the maneuvering characteristics of a torpedo won’t always be enough to accurately hit the target. After the target is pinged—hit by a sonar ping—for a second time, the torpedo will dive deeper. This will allow it to detonate underneath the ship’s hull, ignore anti-torpedo protection, and deal much greater damage. The primary targets for torpedoes are slow-moving ships. Faster and more agile ships, with the proper skills applied, will be able to escape attack by executing timely maneuvers.

However, you have to be extremely careful when using the sonar—after every emitted ping enemy ships will be able to determine your submarine’s last location, and it will be displayed on their Minimaps.

Besides this, submarines will also have new unique consumables and abilities that emphasize their unusual features and specific gameplay style.

However, AA defense mounts and secondary armament will be disabled on submarines in their initial implementation, since their caliber and relative power level would be extremely low in comparison to all other ship types.

The new type will be equipped with unique consumables:

Submarines are relatively slow. Their speed on the surface is a mere 25–30 knots; at periscope depth their speed is reduced further. When underwater, submarines will be able to cruise at the same speed as when at surface level.

If a submarine is detected on the surface or at periscope level, she can be attacked with HE shells, rockets, or bombs. Such armaments will be able to affect targets within a certain radius of impact (splash damage).

A submarine can damage another submarine with torpedoes or by ramming them. Effective use of sonar pings can also allow torpedoes to dive to a certain depth and hit enemy submarines.

What should you do if a submarine has dived? In such case, she can’t attack anyone, but other types of ships won’t be able to attack her either. That’s where destroyers—the main opponents of submarines—come in. They’ll be able to effectively track submarines and hit them with depth charges. Nearly all destroyers will be equipped with this weaponry, with rare exceptions for which the use of such arms wasn’t historically implemented into the design of the ship.

If an enemy submarine is detected within a radius of 4–5 km of a destroyer, a special indicator will inform the ship’s Commander about this. When approaching an enemy submarine, a destroyer can see her estimated last known location. Having arrived at this area, an updated location will be displayed. This will happen several times, though the submarine itself will still remain invisible to her enemies. Eventually, having followed these location indicators and caught up to the submarine, the destroyer will be able to carry out an attack with depth charges. To launch them you just need to float over the detected submarine—the charges will launch automatically.

Stand by for more info!

Submarine gameplay is, first and foremost, about positioning, planning, waiting for the best moment to attack, and subsequently diving into the depths of the sea to escape retribution. The new ship type will be significantly different from the other existing ship types in the game. We hope it will bring a fresh blast of excitement to naval battles in World of Warships.

Naturally, along with the appearance of this new ship type, the skill tree and upgrades will also be updated. At the moment it’s still too early to talk about any specifics, but we’ll definitely share the details of any changes later.